I’ve been incredibly not busy and have been slacking off – or more importantly, I forgot about this blog challenge due to other things coming up like breathing, eating, sleeping, and other important activities.  So needless to say, I’ve missed a day or seven.  So indulge me as I play catch up once again.

Hmm… not exactly a post worthy of an entire blog post so I’ll just list them here for anyone’s interest who might be considering making me dinner at some point although I should mention these aren’t my 10 most favorite foods.  These are more like 10 foods I happened to think of when writing this post:

Day 22 The Best Thing To Happen This Year

Well now this one is just too hard to narrow down.  There were lots of great things that happened this year but just to play along, I’ll list a few that come to mind at this moment:

I’m still breathing, I had a short story published, my kids celebrated birthdays, my son qualified for nationals for wrestling, I celebrated another wedding anniversary, cake was served several times, bacon was eaten on several occasions, vacations were had and the sun continues to rise in the east and set in the west.  Yay!

Well writing for a living, as in getting paid to write best selling books would be a dream job.  That or superhero would be cool.

I honestly did not have just one favorite book as a kid.  I enjoyed all books but the one I remember most was called Lightning Never Strikes Twice.  I remember it because it had a playset that came with it and the little critters squeaked and had this neat little log for a house that velcroed shut.

I also don’t have just 5 favorite blogs.  There are several that I make a point to read every day.  I’ll list a few of them for you in no particular order:

And I could probably keep going but seven is a magic number, or so some people say, so we’ll stick with seven.  Deal with it.

I’m adding a bonus: one of me as a kid and one of me as a teenager at a prom  (I’m the tall blonde) and one more recent but still old photo of me and my husband 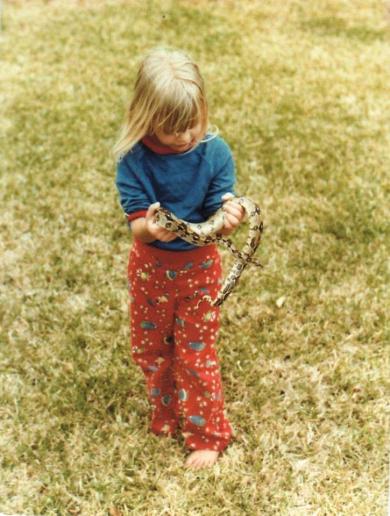 This one seems rather complicated as I do have some dishes I’m fond of that require a bit of work.  So to make things as simple as possible, I’ll list the simplest recipe possible of one of my most favorite meals:

You take the good, you take the bad, you take em both and there you have, the facts of life, the facts of life… oh wait…that’s the theme song to The Facts of Life.  Alright, back on track – You open the box of cereal, pour about 3/4 the bowl full of cereal.  Open the gallon of milk, pour some of the milk into the bowl on top of the cereal until most of the cereal floats.  Return cereal box and milk to their respective places.  Put the spoon in the bowl.  Scoop cereal and milk onto spoon and insert into mouth.  Chew.  Swallow.  Enjoy.  If feeling frisky, do not return cereal box to respective place, turn box over and play game on back of box.

9 thoughts on “Another Blog Challenge Playing Catch Up”